I was on a bus coming from D.C. on my way back to Texas which is a god-awful trip to take on a bus. Its amazing how a hundred miles can feel like a thousand on one of those things. Several dozen travel weary people angry that they couldn't afford a plane ticket do not make good company. But around Knoxville, the company changed and I found the seat next to me occupied by a dark haired girl with long bangs, a blue jean jacket and a bright smile.

I'm not very outgoing in situations like that. I normally have a long book to read and I ignore everyone. But this one was not going to be ignored. The questions started with "Whatcha reading?" and "What's it about?" and "So you like Stephen King?" and continued until I closed the book and looked at her.

"Your not going to let me read, are you?"

Her dark eyes sparkled beneath those silken bangs. "Nope," she said.

I put the book in my bag and she launched into conversations that ranged from alien abduction to some pretty deep philosophy to favorite movies and music and back again.

Amazing how the right company can make a thousand miles seem like a hundred.

Early in the morning, the conversation waned and she snuggled against my arm, a little into my shoulder.

"Don't take this personally but I'm going to sleep on you," she said and dozed off.

Hours later we pulled into the station where we would part ways. She was heading north, to Chicago I think. I was heading south. Her bus left in a hour, mine a little after that.

We pooled our money and bought a world class breakfast of cheap coffee, two bags of chips and a big candy bar. We spread it out on napkins and feasted, finishing one or two of the conversations from the night before. All done, we took turns watching each others stuff while we cleaned up in the bathrooms.

Suddenly, it was getting close to time and suddenly she seemed nervous.

"I want to ask for a phone number," she said finally. "but that's just leading to something that wouldn't work out,"

I shrugged and almost protested. But she just kinda smiled and shook her head. I realized then that there was more to her story than she was telling me.

"Let's just save this for a good memory and leave it at that," she said.

I nodded and looked to the ground, still fighting the urge to argue. But complication lurked like a demon in the shadows of too many miles.

She brightened and gave a little hop towards me. "But I want a hug," she said and spread her arms almost sheepishly.

I opened my arms and she stepped into me and squeezed tight.

And then the music started. Over the speaker system of the bus terminal. Eta James hit that note and she melted in my arms.

"Oh my God," she whispered against my cheek. "I love this song."

She didn't let me go. Not that I wanted her to. The music washed over us and we began to move. Just a little. It wasn't so much dancing as an excuse to hold each other tight. But her hand found mine and I pulled her in at the small of her back and it was nice. Natural. Comfortable.

Her temple was against my unshaven chin and she nuzzled against it.

"I didn't shave," I began but she shook her head.

"So if I let you kiss me" she said "will you love me forever?"

She held me tighter, tucking her head under my chin and we were lost to the song again for another eternal moment until it was slowly over, that last note like the first, haunting and perfect.

And as if on cue, they called her bus.

She held on a bit longer and then stepped away, hand lingering lightly on my chest as she turned without looking up. Then she grabbed her bag and was gone.

And then, as if on cue, they called my bus.

I nodded and got my bag and turned.

A man was standing there. Thread bare suit, cheap fedora, six-string slung across his back.

"Poetry," he said with a smile and glistening eyes. He shook his head and walked away. "Just pure poetry."

I guess it was.
Posted by Unknown at 5:44 PM No comments:

Final Pictures of the Finished Wheel 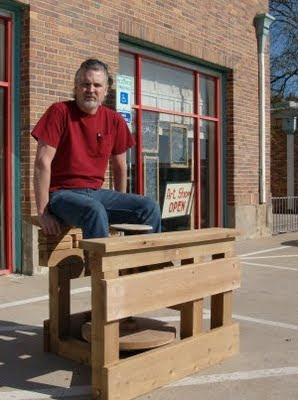 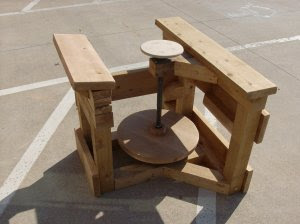 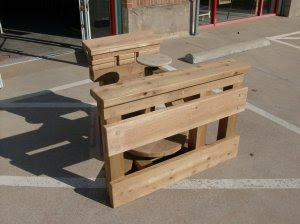 I have to say I'm extremely satisfied with how she finished out. It sits comfortably and spins extremely well. I had a chance to throw the first pot after she was delivered to her new home and I honestly could have thrown all night. I'm very, very happy with the design and can't wait to build the next one.
Posted by Unknown at 7:50 PM No comments: